Underlying the Tezos network is a consensus algorithm, which, for the ease of reference, we will call Emmy. Consensus ensures that participants agree on the same blockchain and on its state. The ideas behind Emmy are described in the white paper and the specifics to its implementation can be found in the documentation. We recall that Emmy is a PoS based consensus with a use of endorsements to speed-up confirmation times and reduce selfish baking. This was done by defining the chain fitness as the total number of endorsements (in addition to the chain length).

This post introduces Emmy+, an improvement of Emmy which still guards against selfish baking but also achieves greater efficiency and stability. Emmy+ will be included in our next protocol proposal.

The main difference is that, in Emmy+, the number of endorsements included in a block no longer influences the fitness, but the timing of a block: the fewer endorsements a block carries the longer it takes before it can be considered valid. More precisely, a block is valid only if its timestamp has a minimal delay with respect to the previous block’s timestamp, and this minimal delay depends not only on the block’s priority but also on the number of endorsement operations included in the block.

As for block fitness, in Emmy+, it increases by one unit with each level. In this way, Emmy+ simplifies the optimal baking strategy: the bakers used to have to choose whether to wait for more endorsements to include in their block, or to publish the block immediately, without waiting. The incentive for including more endorsements was to increase the fitness and win against unknown blocks. However, when a block was produced too late in the priority period, there was the risk that the block did not reach endorsers before the block of the next priority. In Emmy+, the baker does not need to take such a decision, because the baker cannot publish a block too early. This should lead to fewer missed blocks and endorsements and therefore faster convergence.

Another advantage of Emmy+ is that chains that have fewer endorsements, signalling a difficulty in reaching consensus, become slower. This brings the algorithm closer to classic BFT consensus algorithms which have deterministic finality.

Finally, the changes lead to a few other simplifications, like simpler endorsement reward policy and shorter times between blocks when blocks at higher priority are missing, as we explain in more detail below.

In Emmy, the minimal delay for a block with respect to the block at the previous level is given by the following function:

where p is the block’s priority and the values 60 and 75 are given by the time_between_blocks constant, set to [60; 75]. (In the code base, the definition of what we call emmy_delay is implemented by the function Baking.minimum_time; see src/proto_alpha/lib_protocol/baking.ml in the master branch).

The value of initial_endorsers (init_endo) is set to 18. Recall that the maximum endorsing power of a block is given by the endorsers_per_block constant, set to 32. The rationale behind choosing the value 18 will be explained in a technical blog post and is intended to minimize the ability of a malicious baker to steal slots.

As for delay_per_missing_endorsement, it denotes a time period (Period.t) and it is set to 5 seconds. Therefore, with each missing endorsement with respect to the initial required amount, 5 additional seconds need to pass before the baker can send its block.

In addition, the value of time_between_blocks is changed from [60; 75] to [60; 40]. Thus the time between blocks when the block at priority 0 is missing is shortened.

The new delay function can be visualized on the following graph: 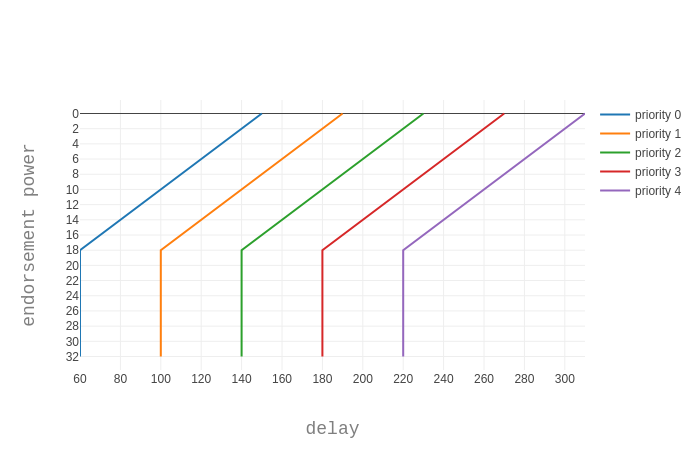 Finally, we emphasize that, besides minimizing the timing between blocks, these constants are also chosen such that a baker cannot steal the baking slots of other bakers by withholding its endorsements (unless it controls significantly more than one third of the total stake). We will publish a more technical blog post with details of our analysis, which will also show how the constants were chosen. The constants might actually slightly change as we refine our analysis.

Changes to the reward system

The rewards for blocks and endorsements are now dependent on blocks’ priority: for priority 0, the same rewards as in Emmy apply, however, for larger priorities, the block rewards become smaller and endorsement rewards are computed differently.

There are three additional RPC services:

Improvements to the baker

The --await_endorsements argument to the baker was removed, as it becomes unnecessary. Indeed, the baker is forced to wait for a minimal amount of endorsements, it does not have a choice any longer.

Now an endorsement operation also includes a slot field, whose value is the first slot of the endorser. This is done in order to determine the endorser more quickly. Previously, the endorser was determined by iterating through all slot owners and checking which public key matched the endorsement’s signature; which was not an efficient method.

Emmy+ in the next protocol proposal

Emmy+ will be part of the next proposal of a protocol amendment. The mentioned changes appear in this merge request.