A new reward formula for Carthage

Note: This analysis was done with the help of Arthur Breitman and Bruno Blanchet (Inria). The code used for the analysis can be found at this url.

A new reward formula for Carthage

In this article, we present a new reward formula that we propose for inclusion in Carthage. This new formula is designed to make the network more robust to non-cooperative baking strategies. It does so without changing the total amount of rewards earned by bakers per period of time, i.e. this update should be transparent to bakers and stakers alike.

We found this new function more resilient to all non-cooperative baking strategies that we currently know. As a side effect, it slightly increases the variance of rewards. The formula is designed to be less punishing to endorsers whose endorsements are included in blocks of non-zero priority.

Baking can be framed as a game in which bakers follow strategies aiming at maximizing their profits, for some notion of profitability. A strategy is called cooperative when a baker bakes publicly, on time and includes all available endorsements. Cooperative baking strategies are the ones that provide the chain with the best security, fastest probabilistic finality, and throughput. Nomadic Labs’ baker (which is currently the most widely used) implements such a strategy.

Emmy+ was engineered relying on the assumption that a baker’s notion of profitability is to maximize their reward, so that the dominant strategy for such bakers is cooperative.

However, there are other notions of profitability that we didn’t consider when designing Emmy+ and which induce bakers preferring these notions to deviate from cooperativeness. These other strategies are bad for the protocol (eg they slow down the chain) but are more profitable to bakers pursuing this alternative notion of profitability.

Our new reward function is designed to protect against non-cooperative strategies arising from these new notions of profitability.

In the rest of this post, we will denote Emmy+B and Emmy+C the versions of Emmy+ using respectively the Babylon reward function and the new one we’re proposing for Carthage.

Let’s introduce some notations. We will consider the rewards earned by a non-cooperative baker \(A\) and those earned by the rest of the delegators aggregated under the name \(B\), over a fixed period of (physical) time. We will denote these respectively \(r_A, r_B\). We will denote their share of the active stake respectively \(s_A,s_B\), with \(s_A + s_B = 1\) (hence we make the choice to ignore undelegated tokens in the inflation computation below). The total supply at the beginning of the time period will be denoted \(S\). For the rest of the article, we take \(S = 800\times10^6\).

When designing the new function, we considered the following notions of profitability:

As explained in the previous paragraph, bakers have preferences that manifest concretely as notions of profitability. In a second step, these notions, together with contextual information on the preferences of the other bakers, induce baking strategies. In the rest of this post, we will posit a non-cooperative baker acting in a context where the rest of the stake is entirely held by bakers using a cooperative strategy. The strategies we depict are not necessarily optimal in any sense: they must be understood as lower bounds on how toxic non-cooperative strategies can be. These are the strategies we implemented up to now, and against which we aim to protect the protocol.

We independently applied two distinct methodologies to analyze non-cooperative strategies and design our new reward function. This allows us to be fairly confident in the validity of the results we’re about to describe.

The result of this analysis led us to choose a new reward function, whose design points are the following:

The final formulas for Emmy+C are as follows. For a block baked at priority \(p\) and containing \(e\) endorsements, the reward is computed as:

while the reward received for each slot endorsed at priority \(p\) is now:

Let us see how this new function fares compared to Emmy+B against the non-conventional baking strategies described above. For each indicator (AR, IAR, RSD) we give two main plots: one for Emmy+B and one for Emmy+C, corresponding to the performance of each baking strategy playing against cooperative bakers, as a function of the stake held by the non-cooperative baker. In addition, we also plot the value of each indicator when the baker plays cooperatively. Each plot corresponds to 8 hours of simulated baking time.

A first observation: the iar-attacker and rsd-attacker perform exactly the same, despite optimizing apparently different criteria.

Let’s start by looking at how these various strategies fare with respect to AR profitability in the case of Emmy+B. The graph below describes the three nonstandard strategies described previously plus a cooperative one. We observe that the cooperative strategy and the ar-attacker strategy clearly dominate the other ones, which is not surprising. What’s more, there seems to be no visible gain by playing the ar-attacker: Emmy+B is well-protected by design against these attacks. 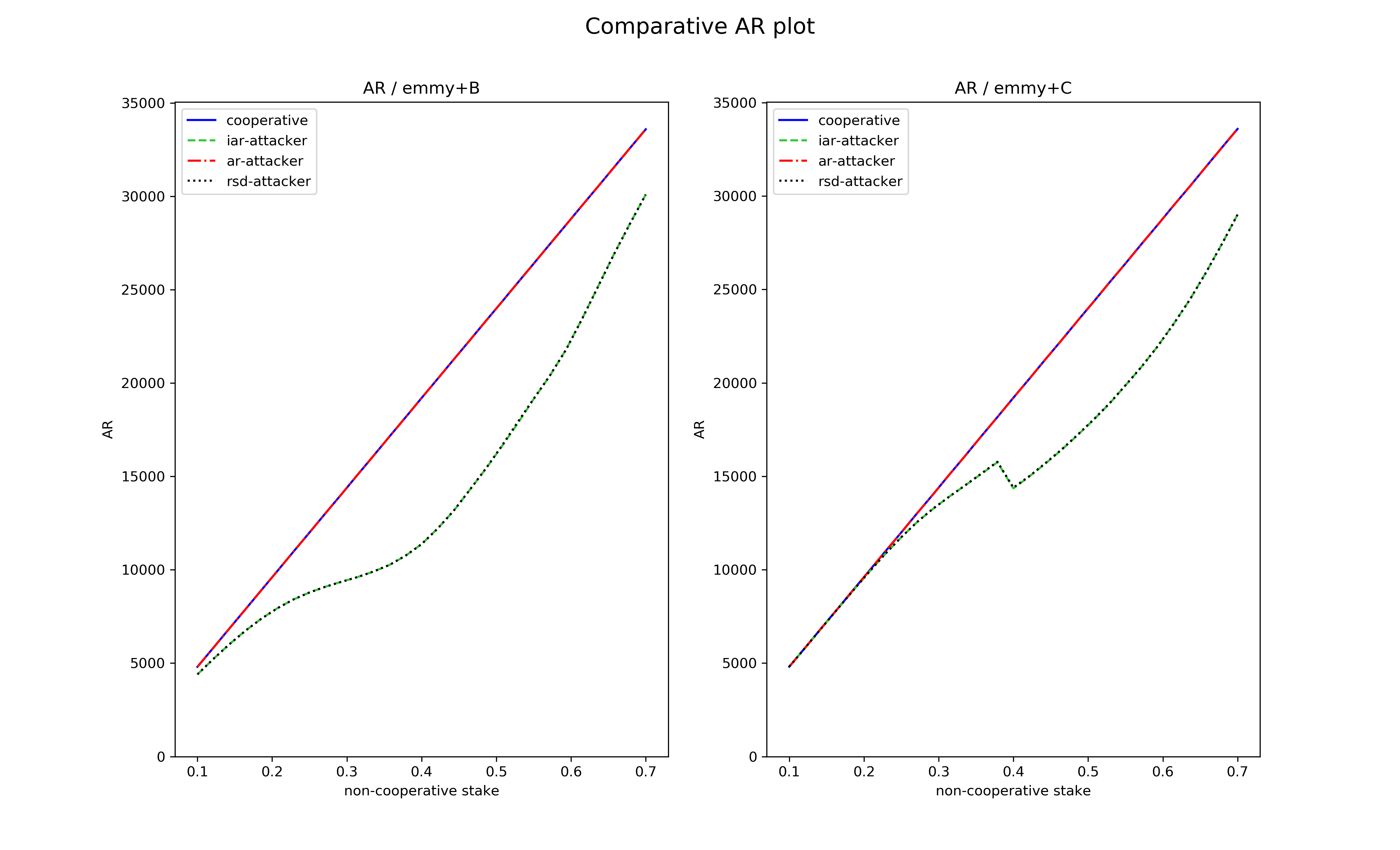 For Emmy+C the picture is similar except for the rsd/iar-attacker strategy which behaves differently (still not getting any noticeable AR gain). The discontinuity in rsd/iar-attacker for Emmy+C is an emergent feature of our strategy and witnesses that it is probably not optimal starting from a non-cooperative stake value of \(0.4\).

For Emmy+B, the best IAR strategies are iar-attacker and rsd-attacker which behave identically. Both have a nonnegligible effect starting at very low attacker stake, which is clearly not a good thing. The effectiveness of both strategies peaks at around \(60\%\) of stake: after this, the opportunities for block stealing decrease as most blocks belong to the non-cooperative baker. 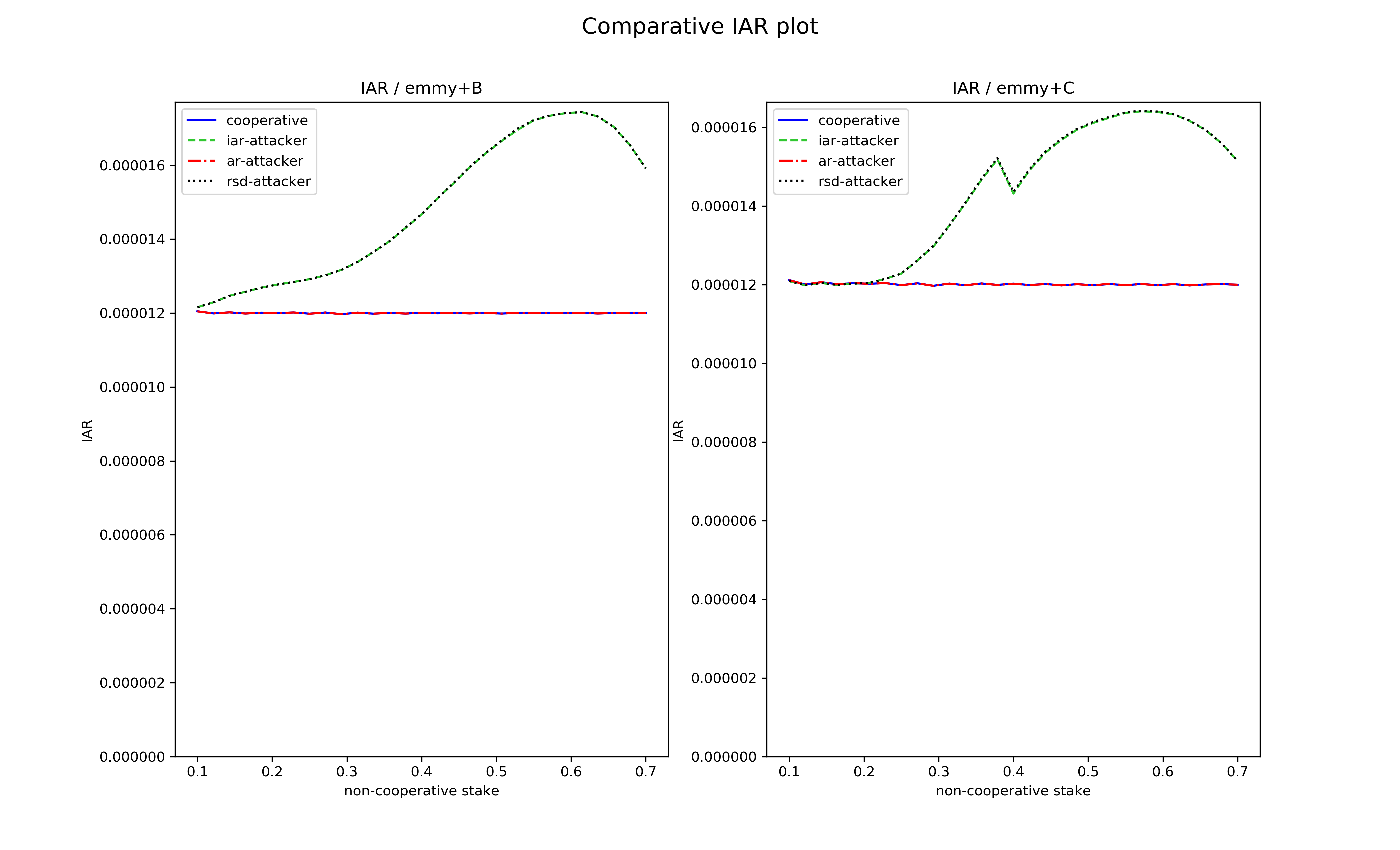 Emmy+C displays a much better behaviour: theiar/rsd-attacker only becomes noticeably effective starting at roughy \(20-25%\) of the stake.

Emmy+B is quite vulnerable to RSD-based attacks as well. iar/rsd-attacker perform similarly for this indicator in the case of Emmy+B and the attack is effective starting at low stakes as well. 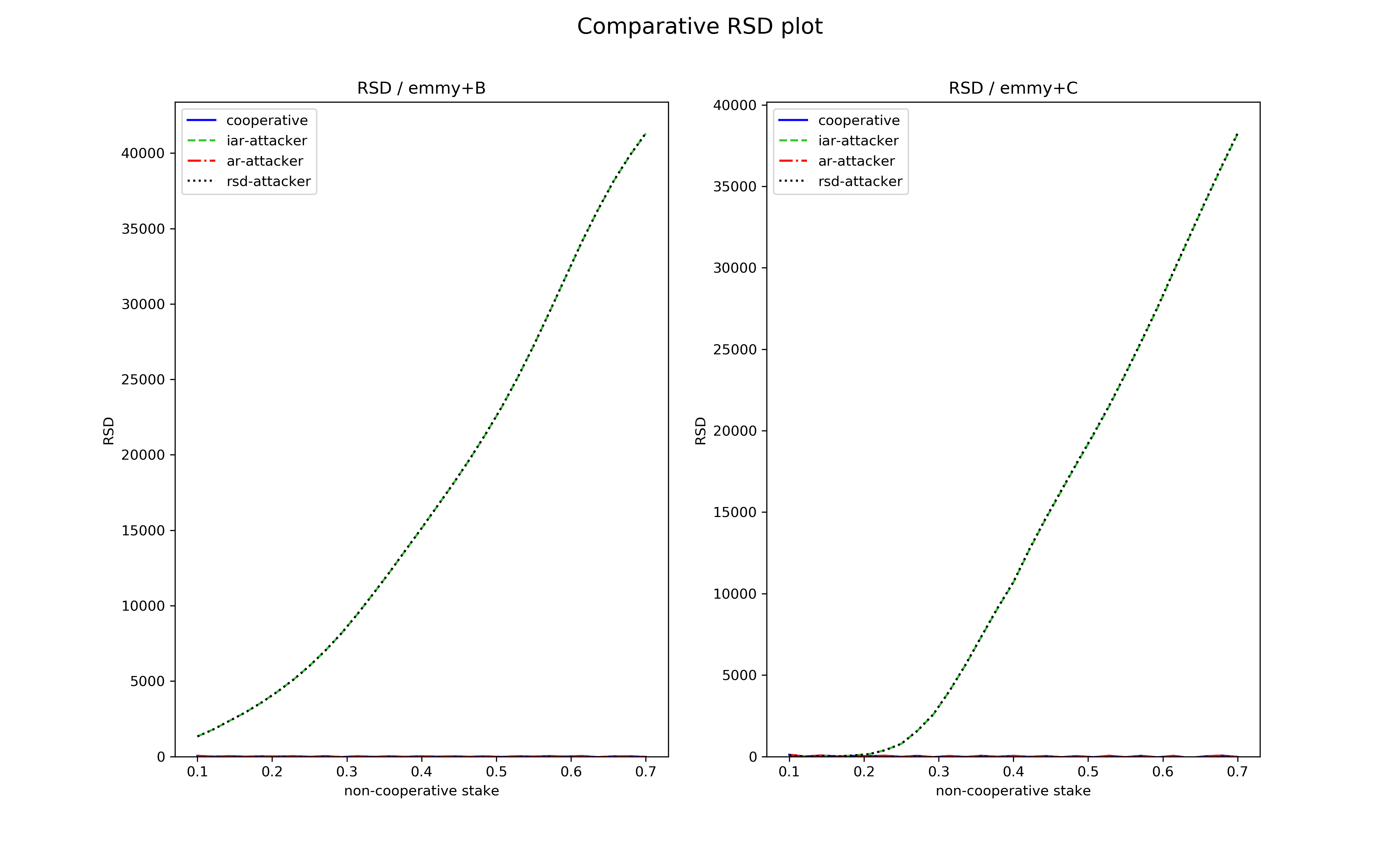 On the other hand, Emmy+C makes iar/rsd-attacker ineffective for bakers with less than \(20\%\) of the stake.

These experiments indicate that Emmy+B is not robust against bakers with notions of profitability other than AR, even against only moderatly complex strategies. On the other hand Emmy+C resists against these strategies for non-cooperative bakers holding a share of the stake up to roughly \(20-25\%\). Above this, Emmy+C still fares comparatively better to Emmy+B. Emmy+C, while theoretically more fragile against AR-based non-cooperative baking strategies, is consistely at least as secure as Emmy+B in our simulations.

Changes to the RPC API

With the new reward formula comes some minor changes to the API. This section presents these modifications.

The structure of the protocol constants was modified to reflect the new formula.

You may access these constants using the RPC /chains/main/blocks/head/context/constants.

TLDR: The constant block_reward was replaced by baking_reward_per_endorsement and the constant endorsement_reward was modified. The rewards constants now contain a per priority reward value that reflects the previously described formulas.

The field block_reward is replaced by the field baking_reward_per_endorsement which now contains a list of mutez values.

baking_reward_per_endorsement is the priority-dependent number of tokens awarded to a block producer per endorsement included in his block. The new constants are "baking_reward_per_endorsement": [ "1250000", "187500" ] meaning that a delegate producing a block of priority 0 will be rewarded \(e \times 1.25\) ꜩ with \(e\) the number of endorsement included in the block. If a delegate produces a block at priority 1, then the second value will be used : \(e \times 0.1875\) ꜩ. If the list is smaller than the given priority, the last value will be used. Thus, for the new proposed constants, blocks baked with priorities greater than 0 will receive the same reward: \(e \times 0.1875\) ꜩ.

The new constants were obtained using the reward formula:

The field endorsement_reward is also modified into a list of mutez values. The new constant are "endorsement_reward": [ "1250000", "833333" ]. The semantics is similar to baking_reward_per_endorsement: a delegate endorsing a block of priority 0 will be rewarded \(1,25 \times e\) ꜩ with \(e\) the number of endorsing slots attributed to the delegate for this level. Moreover, endorsing blocks of priority greater than 0 will be rewarded \(0.8333333 \times e\) ꜩ.

The new constants were obtained using the reward formula:

Designing a good reward function is a non-trivial task due to the open and continuously evolving nature of the Tezos protocol. However, we have solid tools in our hands to quickly adapt to the unexpected ways in which people interact with the chain. We believe the new reward function is a reasonable compromise between the existing behaviour and increased security against non-standard baking strategies. Therefore it will be part of the next Carthage proposal.