04/6/2020 update: After a discussion with Michael Neuder (University of Colorado Boulder), who noticed a discrepancy between his analysis of Emmy+ and ours, we identified a bug in the script used to generate the data for the plot in the “Forks starting now” section. We have therefore updated the plot. The number of confirmations has changed from 6, 12, 44 to 7, 16, 67 for attacker stake fractions of 0.2, 0.3, 0.4, respectively. The discrepancy was due to taking into account the rate of the shortest adversarial forks that are faster than the honest chain; instead, we should have taken into account the rate of any fork faster than the honest chain. In addition, we have provided a more precise explanation of the last plot from the “Forks started in the past” section.

19/11/2019 update: Following feedback from Daniel Moroz and Michael Neuder, we edited the blog post in order to nuance our previous statement that “selfish baking is not profitable”. More precisely, selfish baking only gives tiny profits, for instance 0.0016% gains with respect to the honest rewards, for a dishonest baker with 30% stake fraction. A new table gives the details.

Note: This analysis was done with the help of Arthur Breitman and Bruno Blanchet (Inria). The code used for the analysis can be found at this url.

We have recently announced Emmy+ an improvement of Emmy, the current consensus algorithm used by Tezos. In this blog post, we perform a brief analysis of Emmy+.

Disclaimer: We emphasize that this is not a complete analysis; in particular, we do not present any security proofs. Also, the results of the analysis should not be extrapolated, they only hold inside the model we’re working with. Namely, we assume here that the network is synchronous and therefore all blocks and operations (including endorsements) are effectively broadcast to all participants within a known time bound, namely 40 seconds. Furthermore, we only consider a rather limited attacker, who needs not follow the protocol, but who is otherwise not capable of disturbing the network (by blocking or delaying messages between honest participants).

Let’s first recall the main ideas behind Emmy+: the number of endorsements included in a block no longer influences the fitness, which only increases by 1 with each level. Instead, the number of endorsements determines the minimal time at which a block is valid: the fewer endorsements a block carries the longer it takes before it can be considered valid. Furthermore, the reward policy is adjusted so it discourages selfish baking. As we will see, these changes increase the security of Tezos’ consensus layer.

We summarize next the main findings, which are obtained for the following security criterion: the rate at which a malicious fork can occur should be lower than 10-8, that is, roughly once every two centuries.

Assuming an attacker that has at most 33% of the total stake, in our model we obtain that an operation included 6 blocks ago will only end up on the attacker’s chain (which might exclude that operation) once every two centuries, given that the chain is perfectly healthy during these last 6 levels (that is, no skipped priorities, no missed endorsements). Moreover, our analysis suggests that, for a freshly injected operation, and making no assumption on the health of the chain, 6, 12, and 44 block confirmations are recommended, assuming an attacker with a stake of 20%, 30%, and respectively 40% of the total stake. Here again, the statement is not absolute, but instead relative to our security criterion.

Our analysis also shows that, in our model of Emmy+, selfish baking results in insignificant profits, even when the baker attempting it has a very large portion of the stake.

The changes introduced in Emmy+

The improvements brought by Emmy+ are achieved by means of a new “minimum block delay” function and adjustments to the reward policy.

The new delay function is defined as follows:

In what follows we use the following abbreviations:

In Emmy, the baking reward was set to 16 tez and the endorsing reward to 2/(p+1) tez (per endorsement slot), where p is the priority of the endorsed block.

In Emmy+, the baking reward is 16/(p+1) * (0.8 + 0.2 * e/32) and the endorsing reward is 2/(p+1), where p is the baked block’s priority or the priority of the block which contains the endorsement, respectively, and e is the number of included endorsements. These changes counter selfish baking, as well as incentivize bakers to include all available endorsements.

To get an intuition of the event rates that we see in this post, we recall the following rough correspondences.

Here we assumed that blocks are produced every 60 seconds. Consequently, given a rate of 10-x in blocks-1 of an event e, e happens every 10x blocks, and therefore every 10x minutes.

Note that we talk about the rate at which an event happens rather than the probability of its occurrence, because, in contrast to a proof-of-work system like Bitcoin, if an attacker continuously attempts to make the event happen, she will for sure succeed (at a certain rate).

A malicious fork is one where an attacker is building an alternative branch in parallel with the main branch. The attacker can then make her branch become the main branch, if her branch is faster. Here the attacker’s goal is to break consensus. This is in contrast to the selfish baking strategies, where the goal of a dishonest baker is to obtain financial gain through the reward system. Therefore we assume that the attacker is not refraining from double baking and double endorsing.

Forks started in the past

We are mainly interested in the following question: what is the rate at which an operation included in a block n levels ago will end up on an alternative branch? Here we assume that the attacker’s goal is to build an alternative branch in which the operation is not included. We therefore assume that the attacker starts building her branch at the same level as the block which contains the operation.

To answer this question, we consider the delay accumulated by the current chain, relative to the “ideal chain”, where all blocks are produced at priority 0 and have 32 endorsements. Note that the accumulated delay (called below “observed delay”) is the time difference between the timestamp of the current block and the timestamp of the block containing the operation, minus n minutes (corresponding to n observed blocks). We will see that this delay measures the “health” of the chain: the smaller the delay, the healthier the chain is. The operation ends up on the attacker’s branch if this branch becomes at some point in the future faster than the branch including the current block. 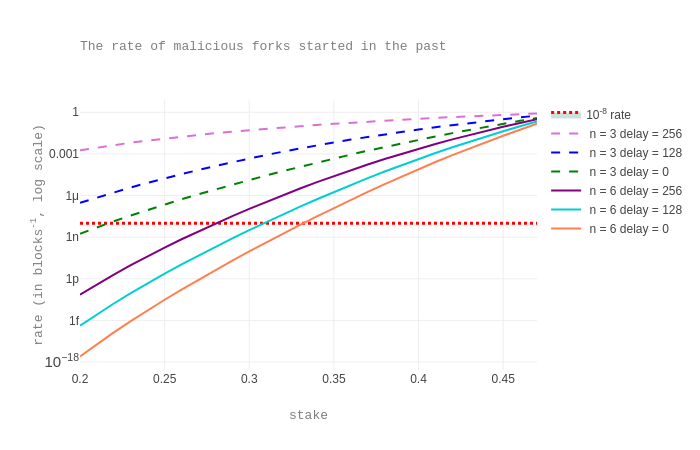 These rates can be interpreted as follows. In our model, one can consider an operation included n blocks ago as final as long as:

To get a better understanding of the case when the chain is not very healthy, we also plot the rate of forks as a function of n for 3 different stake fractions (0.2, 0.3, 0.4) and a delay proportional to the number n of observed blocks, namely 8*n*de, representing that one quarter of endorsements are being missed per level (and no skipped priorities). 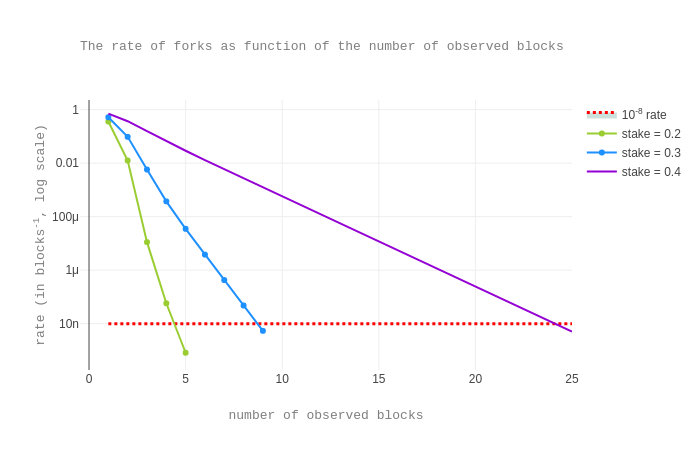 The plot shows that, in our model:

the rate of having a fork of any length starting n blocks in the past is smaller than the one set by the security criterion.

Next, we look into the case where the malicious fork starts at the current block. Similarly to the previous case, we plot the rate of forks as a function of the fork length. This analysis suggests how many block confirmations are necessary, under our assumptions, no matter how unhealthy the chain will be. 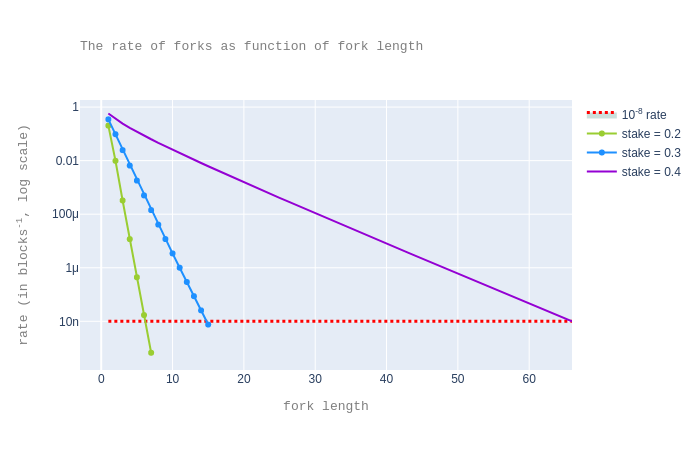 With selfish baking, a dishonest baker tries to “steal” baking slots by building a faster alternative branch in order to gain more rewards. To achieve this, the baker’s only strategy, as far as we see, is to withhold his endorsements in order to slow down the honest branch.

For the ease of reference, we denote the dishonest baker by D. To illustrate the corresponding scenarios, consider the following tree with root block B0. The branch B1, B2, B3 represents the chain being constructed by an honest baker, while B’1, B’2, B’3 the one D tries to construct. Let ti (resp. t’i) be the time of block Bi (resp. B’i). The label on top of a box represents the priority at which the block is created.

The three scenarios are as follows:

We analytically compute the rates at which a baker could steal baking slots by withholding endorsements for the 3 different scenarios. We also compute these rates in the general case, that is, for all possible selfish baking scenarios. More precisely, we consider all branches starting with a block at which the dishonest baker does not have priority 0. (If he has the best priority at some level, it is more profitable to simply bake the block at that level on the honest branch, instead of starting a fork.)

We plot the rate of forks for each of the three scenarios, the sum of these rates, and the rates for the general case, when the stake fraction varies. The graphic suggests that generalizing the scenarios to higher fork lengths (that is, higher than 3) is not worthwhile, because the rates become insignificant. The plots also shows that, at least when D does not have a very high stake, the 3 scenarios are the most relevant. 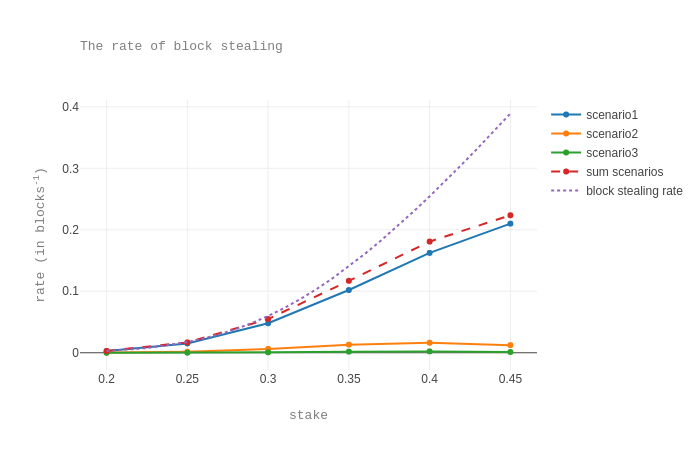 The new reward policy ensures that selfish baking only gives insignificant profits, at least in our model. 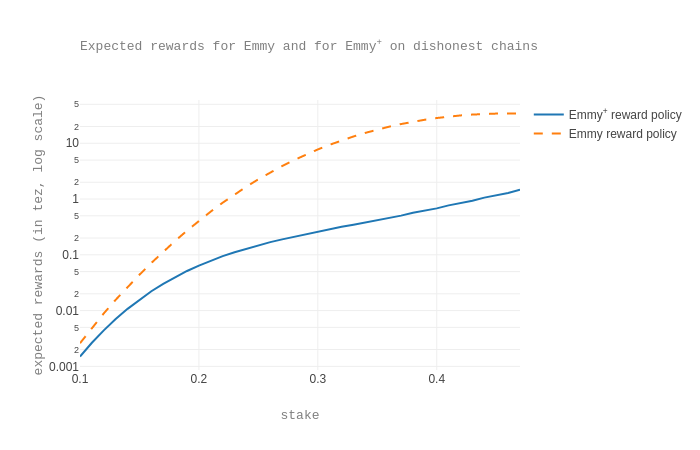 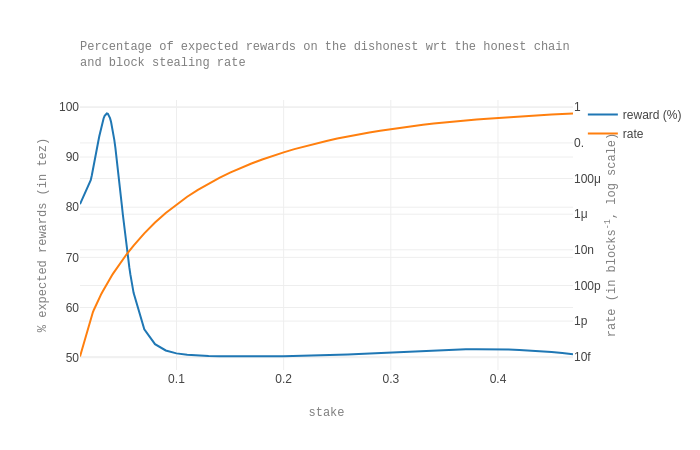 Two main goals guided us when choosing the value of the constants: minimizing the profitability of selfish baking and minimizing fork rates (equivalently, maximizing finality). As we will see, these two goals are conflicting for some of the constants.

Also, we note that for the kinds of analysis we have seen, it is not the concrete values of the dp and de constants that matter, but instead their ratio, dp/de. Indeed, for such analyses, we are interested in which branch of two given branches is faster, that is whether or not

This inequality shows that which branch is faster depends on the dp/de ratio rather than the values of dp and de taken independently.

We have taken dp to be 40 as it seems a reasonable value: it reduces the waiting time between blocks (with respect to the value in Emmy, 75), but it is still large enough to allow blocks and operations to be timely delivered.

Indeed, with a low ie a baker that wants to steal baking slots has less of a leverage by withholding endorsements. Say that the dishonest baker D has e' endorsements and say 32-e' endorsements are available to the honest bakers. For D to be able to delay the block honest bakers are baking, we need that ie - (32 - e') > 0, that is ie + e' > 32. So the lower ie is, the higher the number e' of endorsements D needs to have.

Next, we check the above intuition. We first consider the plot for the rates of of block stealing. 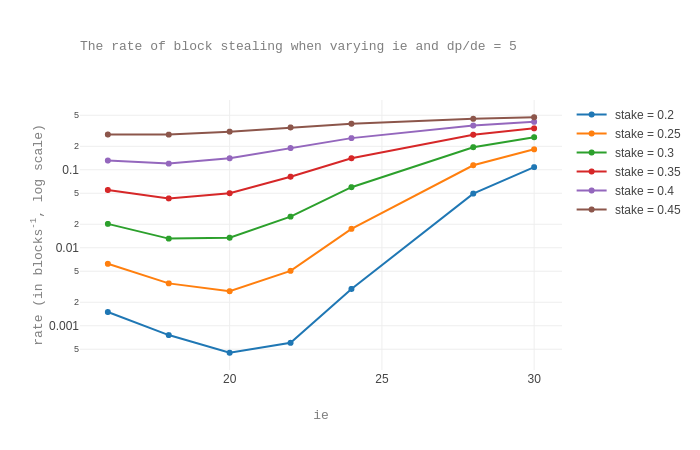 The plot suggests 20 as the value minimizing the rates for each given stake fraction.

We now consider fork rates when the number n of observed blocks is 5 and the observed delay is 128. We note that we obtain similar shapes for different n and delay values. 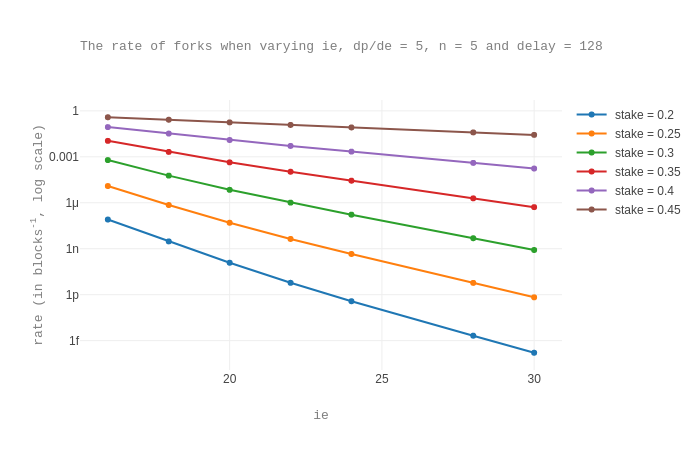 This confirms that higher values for ie correspond to smaller probabilities of forks.

We choose 24 as a trade-off value between lower values to prevent selfish baking and higher values to reduce malicious forks. As we have seen, the new reward policy in Emmy+ reduces even further the profitability of selfish baking.

For the chosen value of ie, that is 24, we now vary the dp/de ratio. We obtain the following graph for the rates of block stealing. 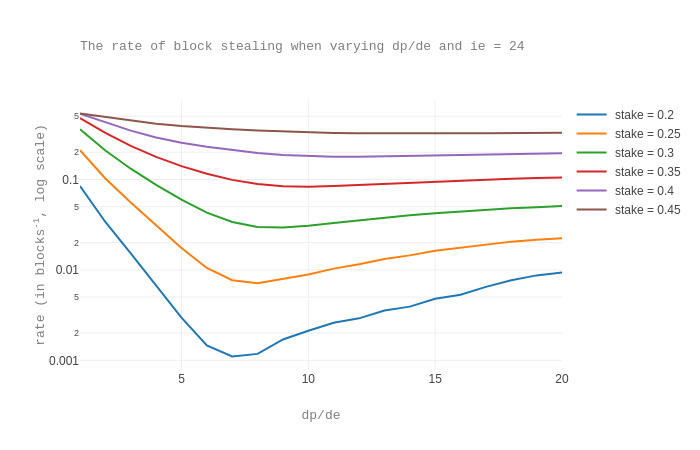 Here we see that a ratio of roughly 7 minimizes all cases. 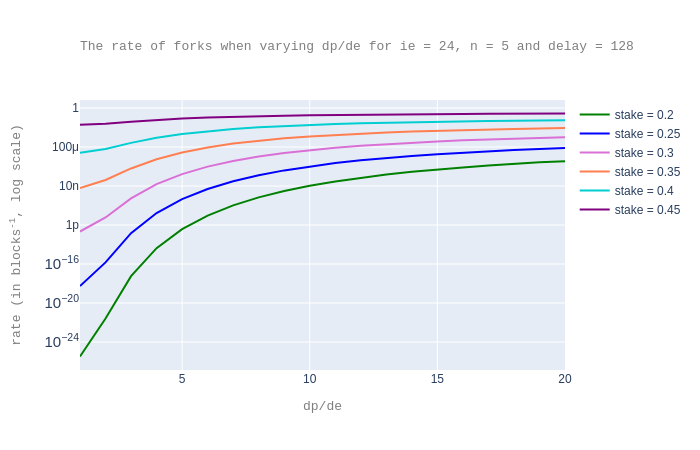 Again, we choose dp/de = 5 as a trade-off value that is good enough for both our goals. This leads to the value de = 8.