The case of mixed forks in Emmy+

Note: This analysis was done with the help of Bruno Blanchet (Inria). The interested reader can experiment with our code used in the analysis. As in the previous analysis, we do not present any security proofs.

This is the fourth in a series of posts on Emmy+:

So far, we assumed that malicious bakers wanted to undo a transaction. In this post, we consider instead that they want to maintain a (malicious) fork for as long as possible.

We provide experimental data that such scenarios do not have a significant impact on the previous analysis, which thus remains robust in the presence of this kind of attack.

For readability we introduce some notation: we use \(\hb\), resp. \(\cb\) to distinguish between honest and corrupt.

In our previous analyses (as above) we assumed \(\cb\) wants to undo a transaction, so:

Now, suppose \(\cb\) wants to maintain the system in a forked state1 as long as possible. So:

The roles of the two chains are thus swapped, and that’s why we talk about mixed forks: the same chain may be \(\hb\)‘s chain at some point and \(\cb\)‘s chain at some other point, and this swapping of roles may happen more than once.

We illustrate such a scenario in Figure 1 below, where:

We assume \(\cb\) has enough stake and chance to have consecutive 0 priorities for the blocks following \(b_1\), so that \(\cb\) can bake those blocks sooner than \(\hb\).

\(\cb\) could in theory continue baking on both chains and force \(\hb\) to swap chains repeatedly, assuming \(\cb\) receives priorities and endorsement slots to allow it. We would thus like to quantify to what extent can \(\cb\) do that: how often and for how long.

To experimentally show that the probability that \(\cb\) can maintain a fork decreases (sufficiently rapidly) as fork length increases, we revisit the scenario “forks starting now”. We consider the following question:

How long can \(\cb\) maintain the system in a forked state?

To answer this, we use an approach similar to the one for computing the probabilities of forks in the non-mixed forks case. We presented the methodology behind the analysis in a previous post. However, the key aspects needing careful consideration are: 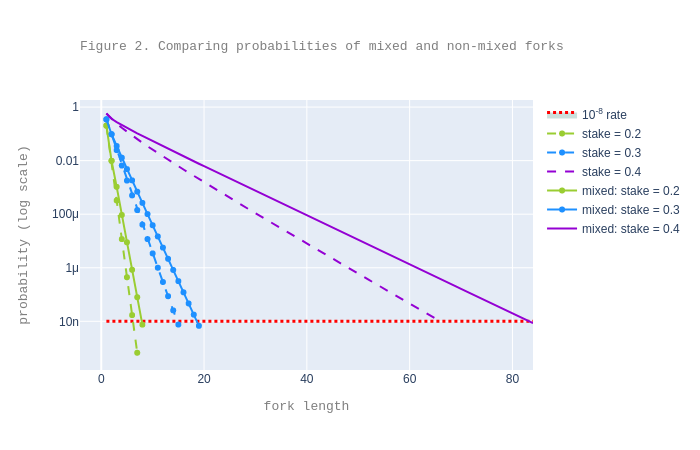 To conclude, our experiments show that, even if \(\cb\) tries to repeatedly make \(\hb\) swap chains, \(\cb\) cannot do this for too long: the number of expected confirmations when considering “mixed forks” is only slightly higher than without them.